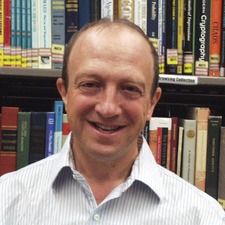 My main research interest at the present is in the Rossby waves. These are the waves that represent huge vortices in the ocean and atmosphere, due to the the earth's rotation. People encounter the same kind of waves (from the mathematical viewpoint) in the nuclear fusion, when they try to confine hot plasma by a strong magnetic field. We have found that the nonlinear dynamics of Rossby waves has an unexpected extra invariant (in addition to the energy and momentum). It was proved that this invariant is unique. Recently, we have found that this invariant implies that the energy organizes itself, transfering from small scale eddies to large scale zonal jets (along the parallels). This is a widely observed phenomenon on Earth and other planets (in particular, on Jupiter and Saturn). My other long-standing research interest is in Turbulence. Particularly, I am concerned with the Wave Turbulence. Examples are the rough sea (due to the water waves), the climate (due to the Rossby waves) or optical turbulence (due to the electromagnetic waves). Recently I have developed the statistical near identity transformation (SNIT) to derive the averaged equations of wave turbulence.