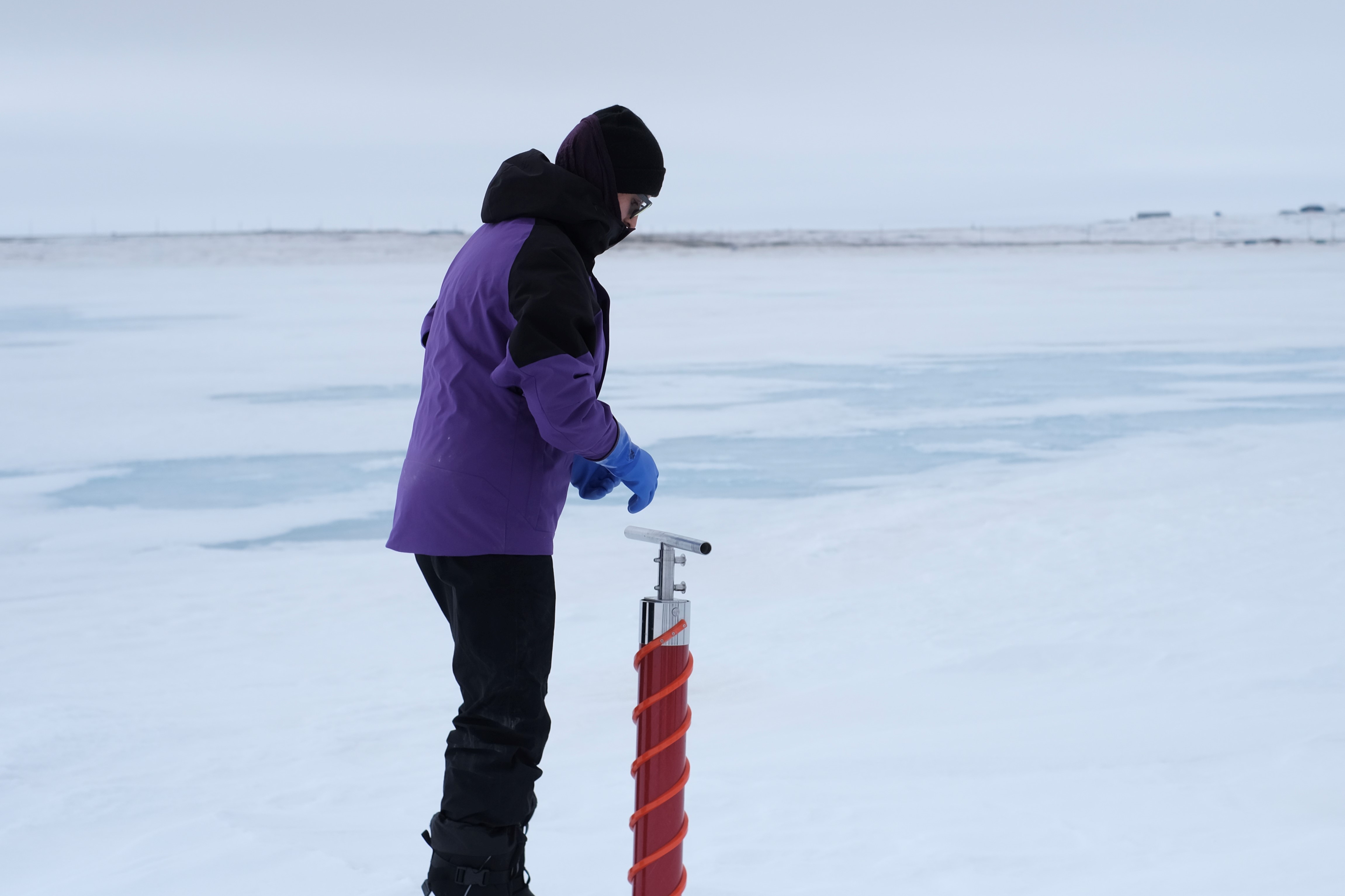 The purpose of the BEPSII program is to provide early-career polar researchers an opportunity to learn field work methods for understanding and analyzing polar sea ice firsthand, as well as building a community in the sea ice research world. Competition for acceptance in the program is competitive—nearly 100 applications were received for 30 spots.

Recently, the Math Department asked Hardenbrook about her adventures in the Canadian High Arctic.

How did you become interested in sea ice research?

I started my college-level educational journey at the U as an undergrad in 2014. I knew that I wanted to pursue a career that would allow me to do something related to studying climate change in some way, but I also found my passion in studying math. I began working with Dr. Ken Golden in my junior year. He works right in that intersection of climate change, specifically sea ice and math. I was lucky enough to be accepted to the U for my Ph.D., which I am grateful for because being able to continue in this research direction has opened my eyes to a lot of really important research questions about things—such as the fact that all living things depend on sea ice to survive, including humans.

How did you travel to Cambridge Bay?

We left Salt Lake, flew to Seattle, and then to Edmonton in Canada. After spending the night in Edmonton, we flew to Yellowknife and then to Cambridge Bay. Yellowknife is a beautiful town in the Northern Territories. On all of our flights, I couldn't stop looking outside the window on the plane as the landscape changed slowly from the familiarity of the Wasatch mountains to the flattened landscape surrounding Edmonton to the frozen lakes and dense woods surrounding Yellowknife to the endless snowy and icy terrain of the Canadian High Arctic, which includes the area in the Northwest Territories, Yukon, and Nunavut. 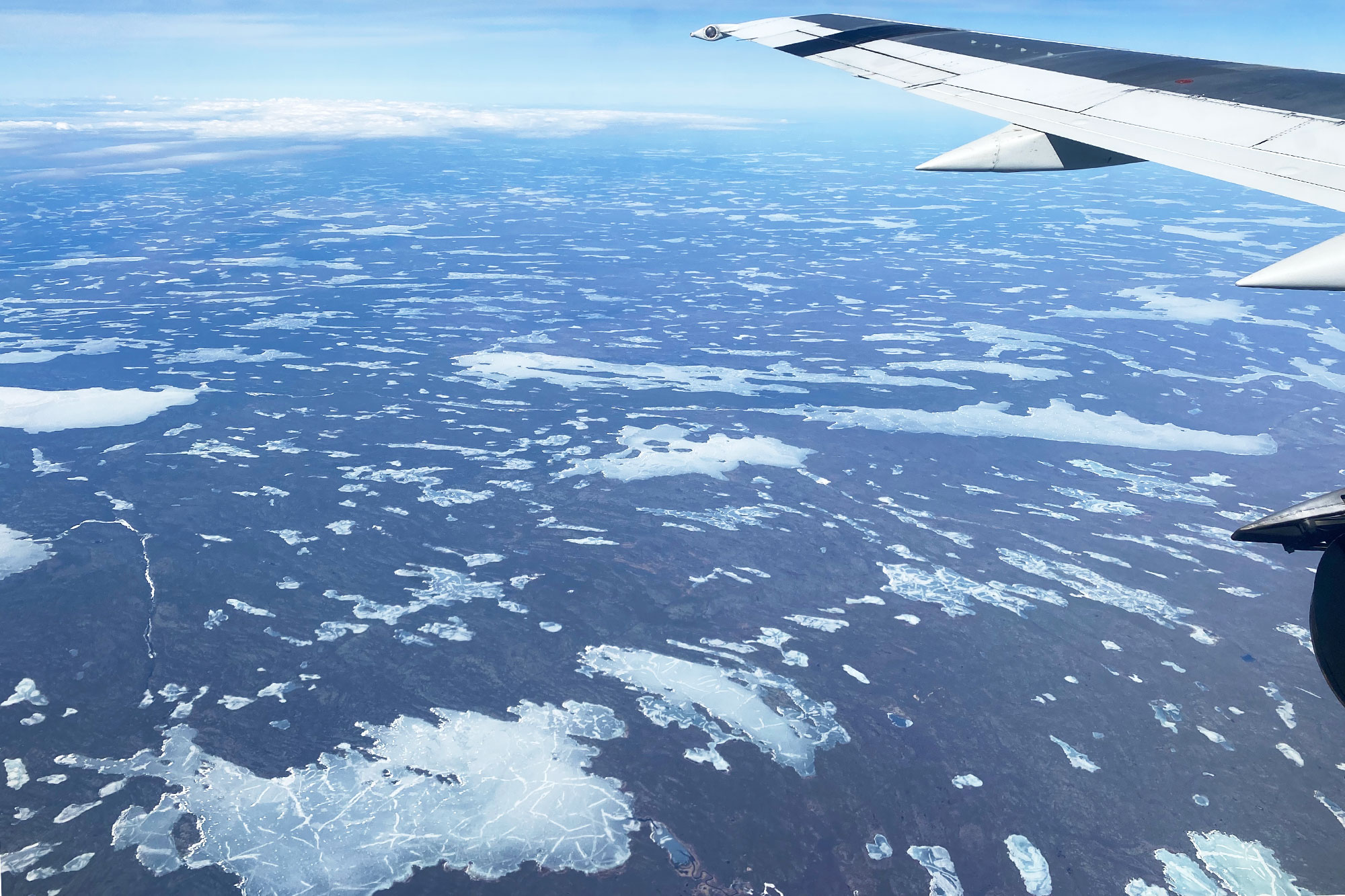 What was it like meeting the other fellow scientists and colleagues?

Meeting other blooming scientists was equally as exciting as actually getting to be on the sea ice for the first time. I now have 30 friends all around the world who are working on exciting and relevant problems relating to polar sea ice, who I can potentially work with in the future. I certainly have never had that sort of network before! The relationships I made with other early-career researchers at the BEPSII Sea Ice School left me with a renewed passion for my own work and for asking questions I haven't thought of before.

The activities really varied day-by-day, but we did have several lectures from experienced polar researchers that ranged among topics. For example, we heard from experts studying biophysical processes of the ecosystems and organisms living within the Arctic Sea ice. The researchers are investigating the movement and transport of critical nutrients and trace metals in the Chukchi Sea, the optical properties of sea ice, and how snow on the surface comes into play. We did have a few days of field work, the first two primarily were practice days for learning how to drill ice cores, dig snow pits, take snow hardness measurements, make sack holes, and more. We had a lot of free time to explore the area surrounding Cambridge Bay, although we didn't venture too far away from the town itself. You only have to go out 3/4 of a mile or so before you really understand how remote the area is. 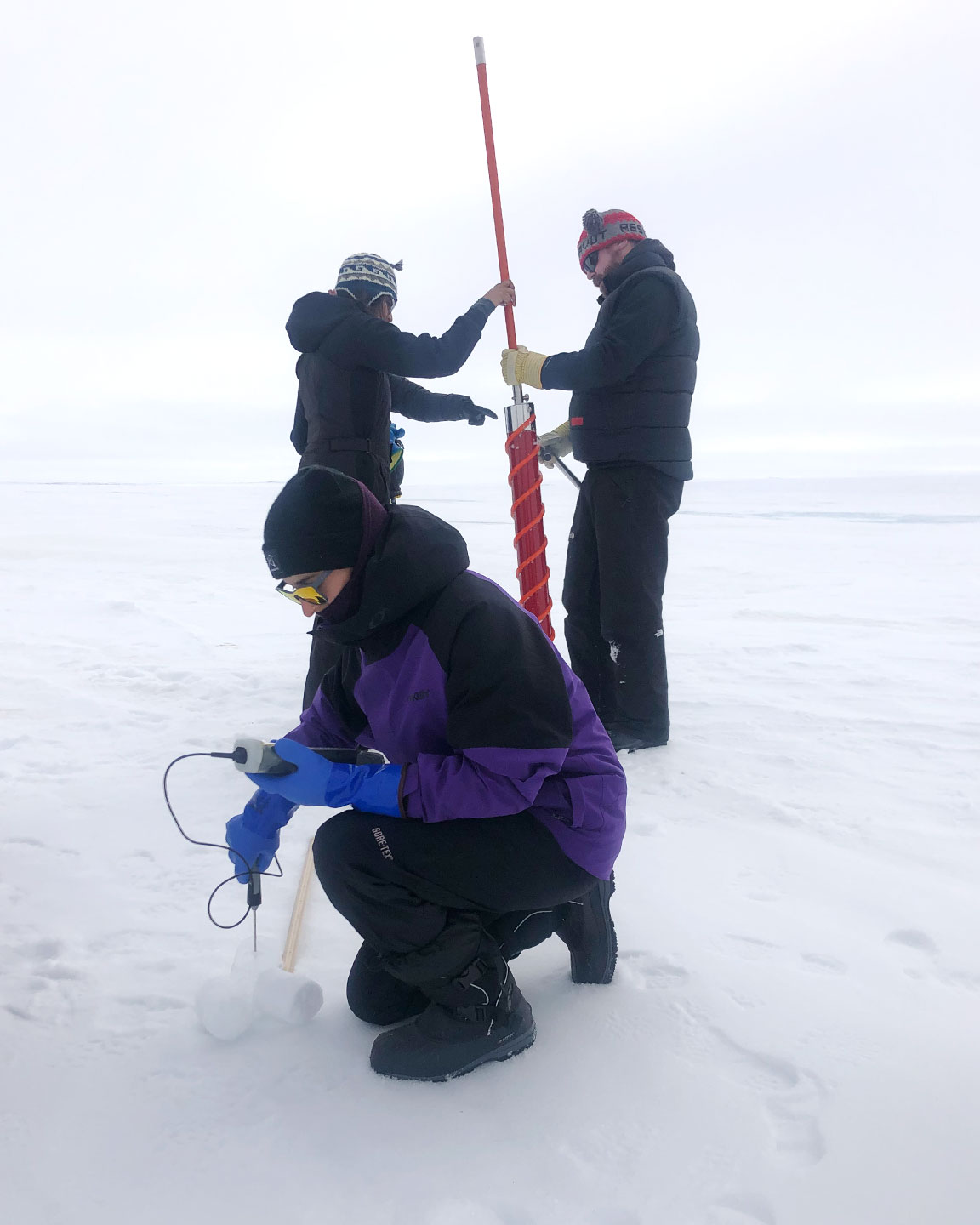 What kinds of research/field work did you do?

What were your living quarters like? What about your meals?

We lived in apartments of eight people each, and within the apartments we shared a room with one person. Our apartments were part of the Canadian High Arctic Research Station (CHARS) campus, and they were very nice. Because the sun was out for most of the day (or for several hours the entire day), our apartments were pretty warm despite the outside temperature being below freezing. Our lunch and dinner were catered by a local business, and our breakfast foods were purchased from the local grocery store. The price of foods that I really take for granted, like fresh produce and even things like peanut butter, in Cambridge Bay are incredibly expensive. As Julie mentioned in her profile, we heard that a single watermelon costs $75, which is an  extreme example, but it was still shocking to me. 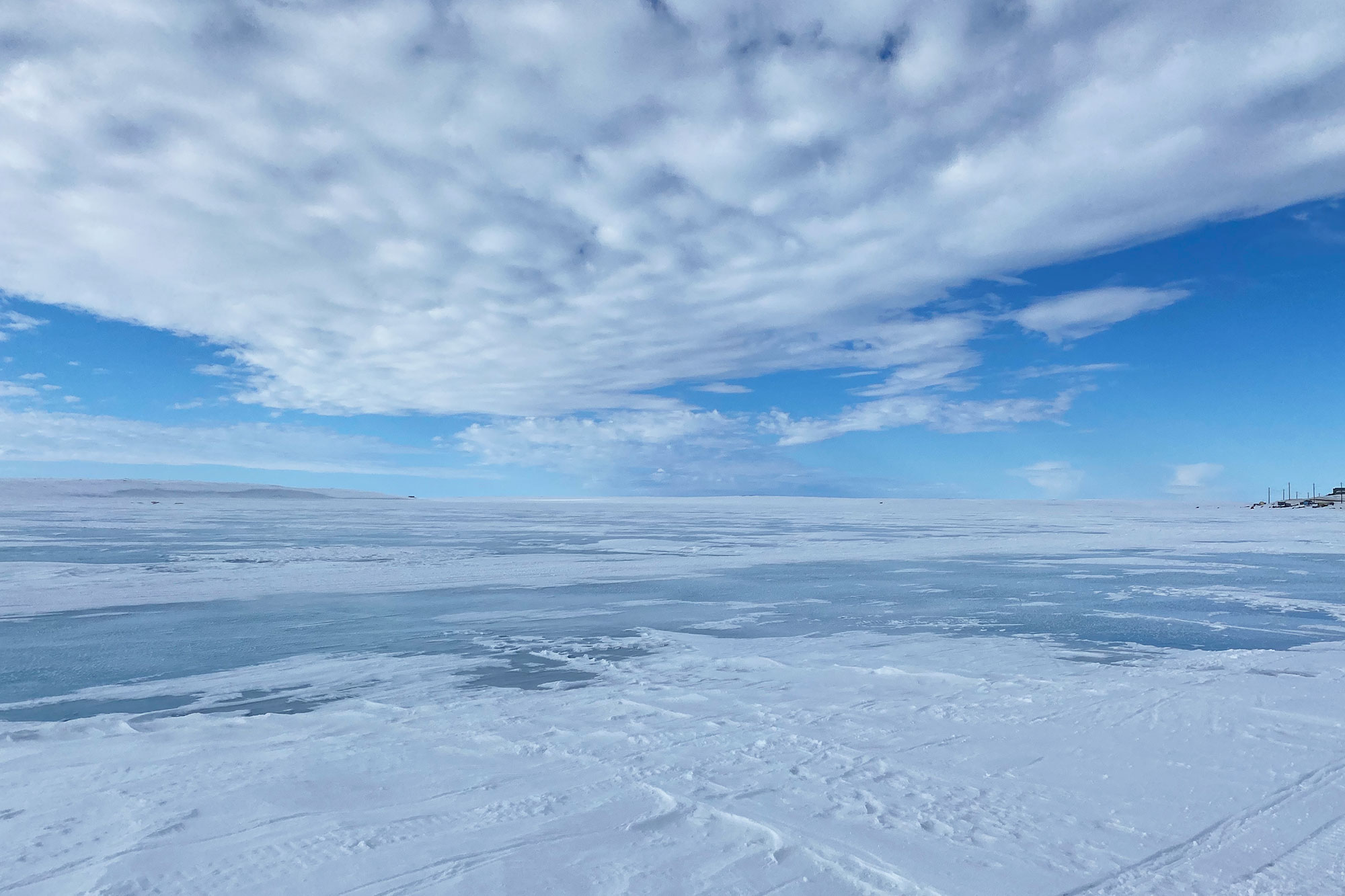 What did you enjoy most about the experience? What was the environment like?

I truly enjoyed the entire experience, but I think selfishly finally getting to be able to walk on the sea ice, see the algae at the bottom of the ice core we took, feel the cold summer Arctic air on my face, and experience that environment was life changing for me. I did get a little emotional when I first stepped out onto the ice, because I've wanted to be able to do that now for the last six years. I am also so grateful to be able to make the friends that I did. The people I met there are so  passionate about their work, and that drives me to continue doing research in this field. The environment was like nothing I've experienced, and it's kind of hard to put into words. We got to be there for several days with no sunset. Even though it was hard to sleep sometimes, I didn't mind because it was so beautiful on the lucky days when the clouds would clear out and the snow would stop falling. The air was incredibly dry despite us being right near the ocean—I mean it's technically a desert up there—so I think the cold felt a little less intense unless it was windy (which it often was). I think the most notable thing for me was just how quiet and flat it is. I could see many miles on a clear day.

There is an Inuit legend about a family of giants who died while crossing Victoria Island looking for food. These giants are the three eskers (a ridge of stratified sand and gravel, deposited by meltwater from a retreating glacier or ice sheet) nine miles outside of Cambridge Bay. They are named Uvayuq (after the father), Amaaqtuq (after the mother, who was pregnant), and Inuuhuktu (after the son). It is so flat that you can see Uvayuq clearly from the town. In fact, some of us actually considered running to it, but we got too nervous about potentially meeting a bear on our way, so we didn’t do it. Luckily, we didn't see any bears (polar or grizzly), but we heard that there was a polar bear 30 miles out from the town somewhere. We did see a few Arctic fox, which was really exciting because early on in our time there, their fur was completely white and they are hard to see. As time went on, we saw Arctic fox that were starting to shed their winter coats. Their summer fur is short and black, so they’re much more visible. We also saw a few Arctic hare, but they are very good at hiding so we didn’t see too many. There were also a lot of birds—unfortunately, I’m not much of a birder at the moment so I couldn't identify them. 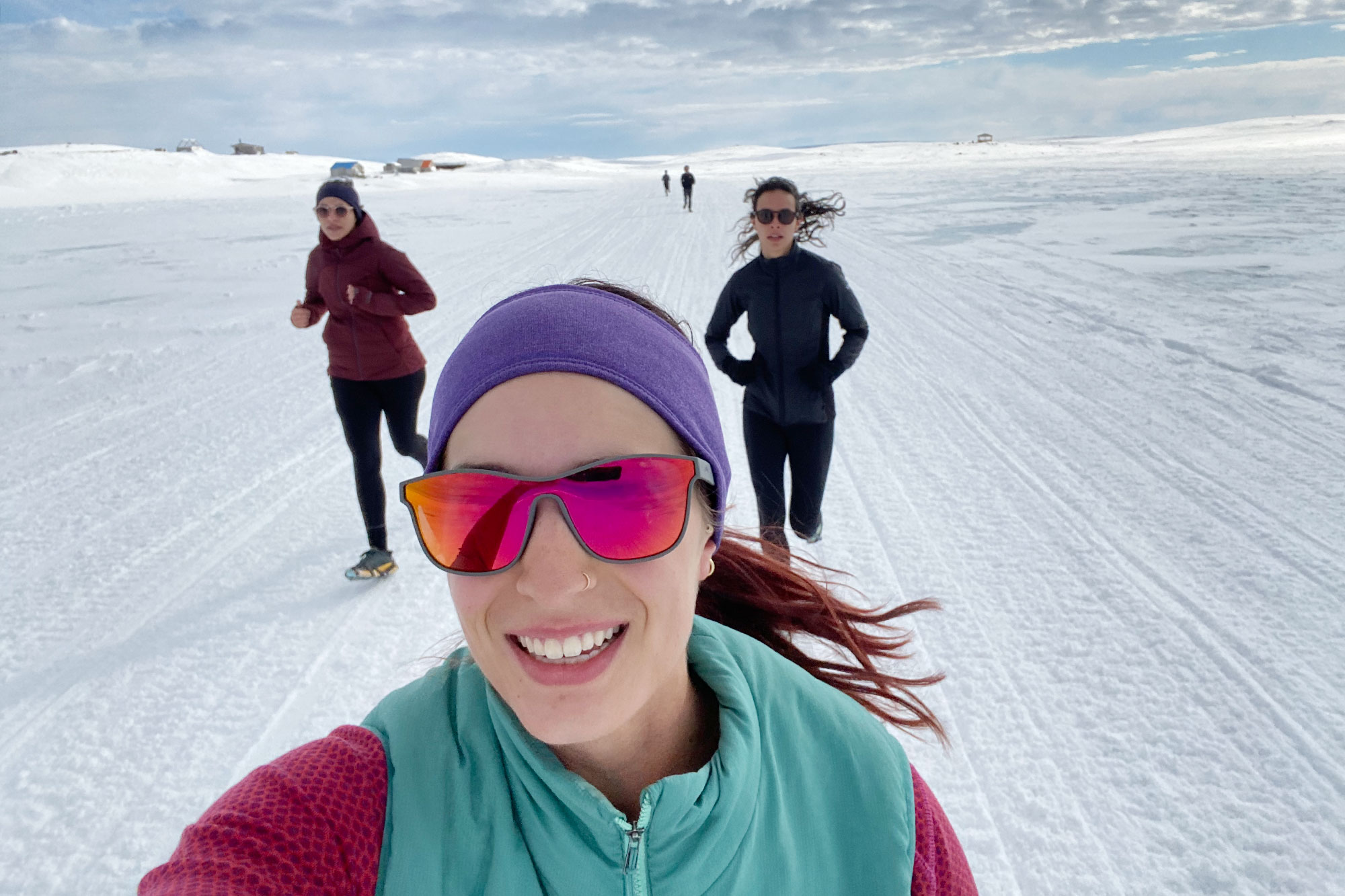 What are your plans after you receive your Ph.D.?

I am hoping to get a postdoctoral research and teaching position at a college or university. I love my research, and I also love teaching undergraduate students about math, about sea ice, and about the environments around us. A life where I can continue on with both of my passions would be a good one, and so I hope to do that. 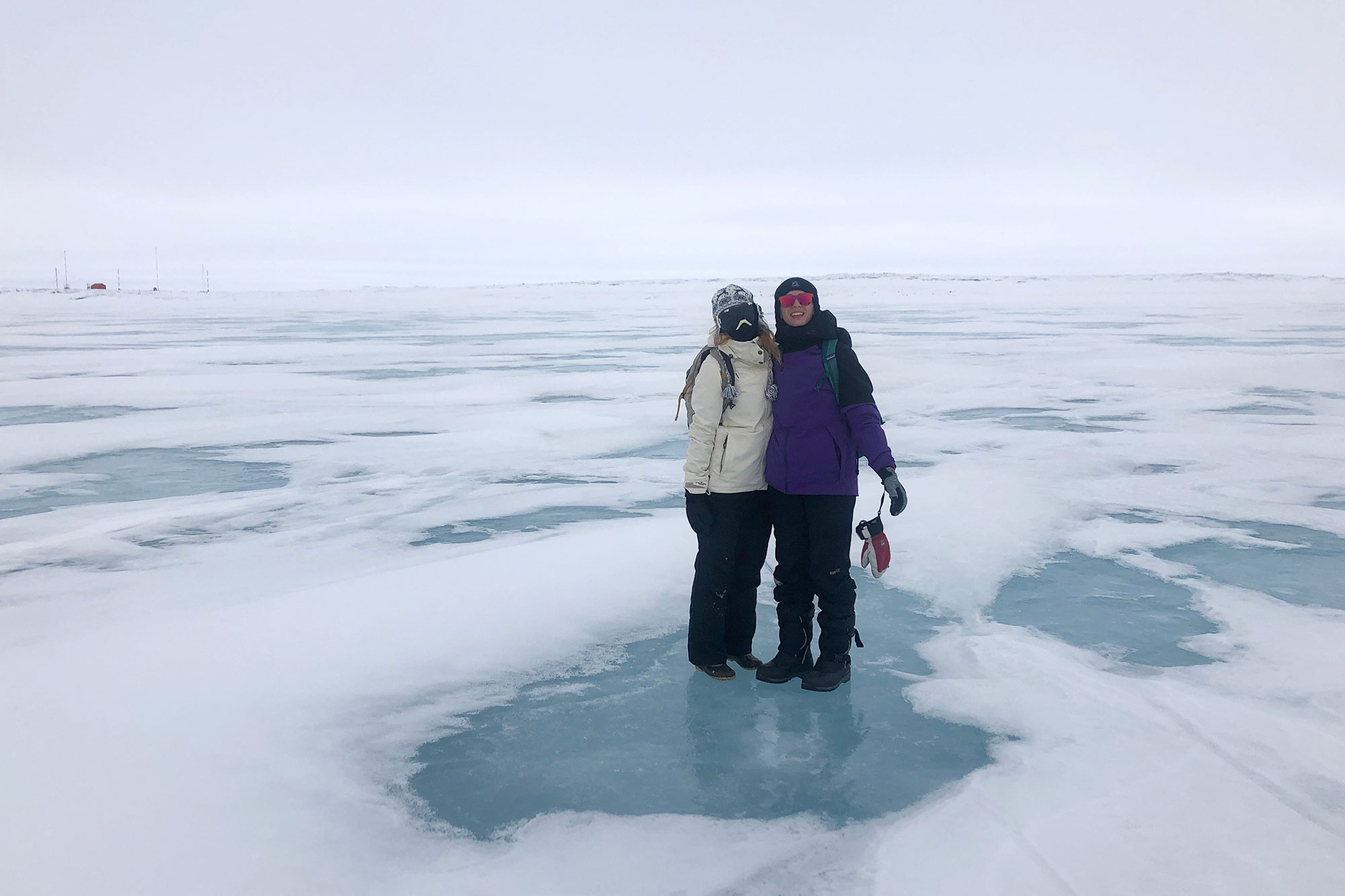