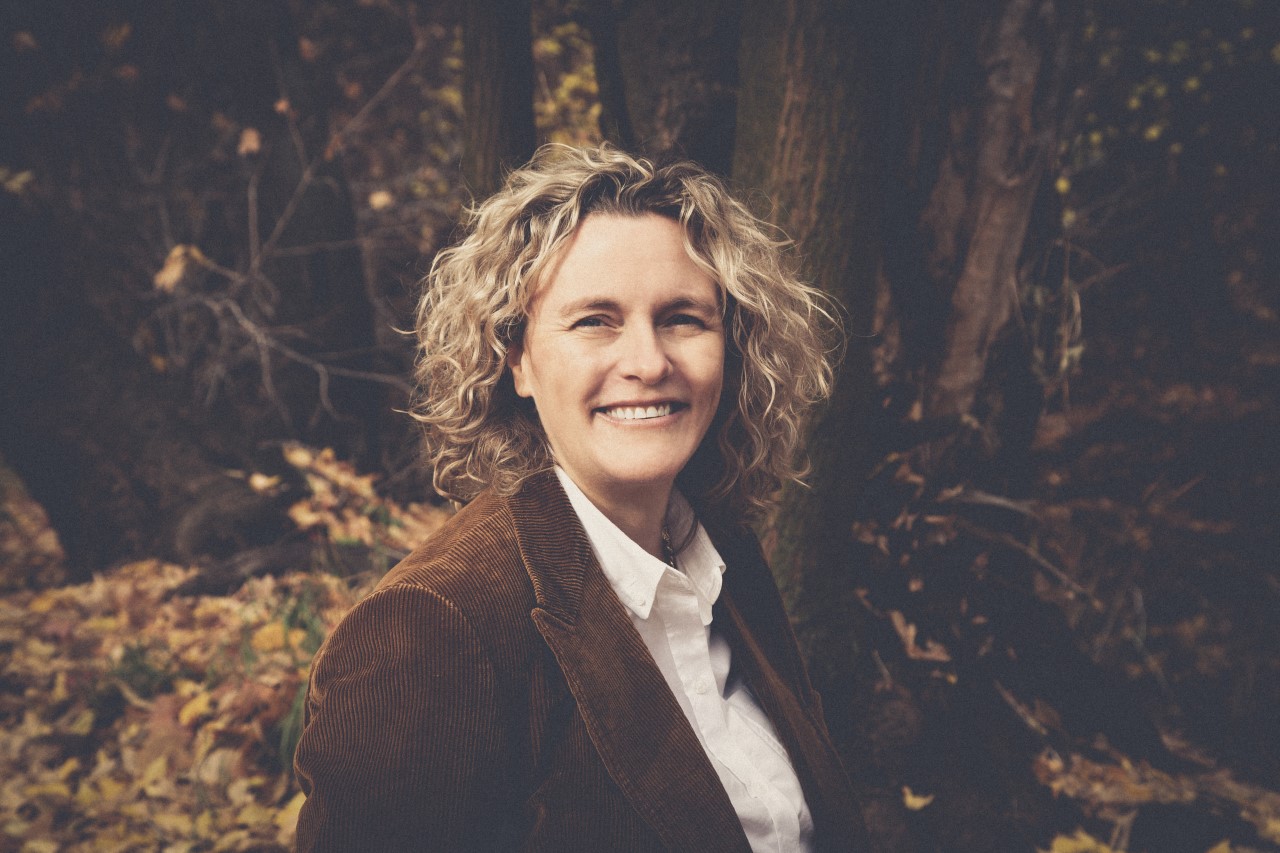 Lindsey Henderson (BS’2002 Mathematics Teaching, with a minor in geology) is poised to lead a revolution in how math is taught in Utah. As the Secondary Mathematics Specialist for the Utah State Board of Education, she and her team determine how Utah school kids are taught mathematics and which math courses are useful for their career paths following high school graduation.

In October 2021, Henderson and her team posted a survey asking Utah’s tech founders, executives, and chief technical officers to discuss the kinds of math typically used in tech careers. The results were interesting and surprising. According to the tech community, calculus is moderately useful because it teaches problem-solving skills, but it isn’t particularly useful in daily work. Other respondents thought calculus should be replaced immediately with more useful math-related subjects, such as AI and data science. Another study by Dr. David Bressoud, DeWitt Wallace Professor Emeritus at Macalester College says that studying calculus in high school is only marginally beneficial for the small number of students (18%) who study it.

“These responses reveal how much math skills in the workplace have changed and suggest how important it is for students to learn new and different skills for their future careers,” said Henderson. “Skills such as how to analyze and interpret data and spreadsheets and how to create other types of visual data.” Half of the respondents reported using algebra often, but the majority noted that they seldom, or never, use geometry, trigonometry, and especially calculus. The results of the survey mirror the results of a similar and larger survey created by professors at Stanford University and the University of Chicago in 2019, which can read about here. For now, the Utah State Board of Education is still collecting data and hasn’t yet decided on how best to update secondary mathematics courses and teaching for Utah students.

In 2021, Henderson received a Women Tech Award from the Women Tech Council for her educational leadership.

Henderson grew up in Spanish Fork, Utah, and was raised by a mom who taught deaf students and a dad who taught kids who had been hospitalized due to mental illness. Her mom and grandfather have strong roots at the U since they both graduated from the university. Growing up in Utah County, Henderson’s family was considered an outlier because they always cheered for the University of Utah teams at sporting events.

“I saw the U as an opportunity to further my education and as a safe place to start learning how to become an adult,” said Henderson. She loved living on campus (in the Van Cott dorms and then eventually in Benchmark after the 2002 Winter Olympics). She worked at the front desk at Van Cott as well as at the Heritage Center before, during, and after the Olympics.

She was very good at math and enjoyed calculus and linear algebra. She decided that she wanted to earn a math degree because she loved learning, doing math, and she hadn’t heard of many women who had math degrees.

“My education at the University of Utah has made every difference in my life,” she said. “I feel so fortunate to have had access to such a high-quality institution of higher education.  I had a wonderful experience at the U, both socially and academically, and I feel it prepared me for success!”

After she received an associate’s degree from Utah Valley University (UVU), she transferred to the U. Her favorite math professors were Dr. János Kollár (linear algebra), Dr Alexander Balk (differential equations), and Dr. James Carlson (history of math).  Although she had already taken linear algebra at UVU, she took the class again at the U just for the opportunity to study with Dr. Kollár. She was impressed with his teaching style, and today she still loves linear algebra.

She remembers Dr. Balk’s efforts to engage students in differential equations by using rainbow-colored chalk to make things exciting. She appreciated his interest in students, and she felt seen and valued by him, which contributed to her doing well in his class.

She still thinks most about a history of mathematics class taught by Dr. Carlson. She loved learning about how mathematical topics were discovered and about different cultures and the way they reasoned and made sense of the world mathematically. While she was taking his class, she suffered a life-threatening snowboarding injury and had to be hospitalized. Dr Carlson worked with her one-on-one to help her make up an incomplete grade. “He did it out of the goodness of his heart and because he truly cared,” she said. “To this day, I appreciate his willingness to work with me, and I will never forget how he adapted his teaching to support me during a difficult time.”

Dr. Mary Burbank in the College of Education was a non-mathematics professor who greatly influenced Henderson. She was Henderson’s student-teaching professor, and Henderson flourished in her classroom. “She was the kind of professor who really took the time to get to know you, and then she pushed you to grow in ways that you needed to grow,” she said. “I loved working with her and appreciated the trust and relationship building she invested in because it really helped me hone my teaching skills.” 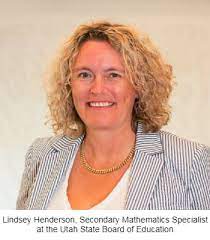 “Learn to be your biggest advocate—nobody else will do it for you. Make space for yourself and your ideas because you have wonderful thoughts to share and so much to learn from others,” she said. “Not everyone will recognize your potential, and that’s okay as long as you do. Your persistence and thirst for knowledge will benefit you in so many ways in the future!”

Once Henderson graduated from the U, she accepted a position teaching integrated 8th grade science and pre-algebra at Bryant Middle School in the Salt Lake City School District.  After two years teaching both mathematics and science, she was told that she wasn’t considered “highly qualified” to teach integrated science and that she would have to complete more coursework to continue. At that point, Henderson decided to become a full-time mathematics teacher. She worked hard to keep her middle school students interested in math, and she tried to harness their excitement for learning. She would integrate mathematical discovery and enrichment tasks into the standard curriculum, such as having students use Mobius Strips, build tetrahedral kites, and work on other mathematical projects.

After five years at Bryant, she began teaching mathematics at Highland High School. From there, she transferred to East High School, where she spent the next nine years. Throughout her 13-year teaching career, she taught all secondary grade levels and all math subjects offered in Utah, from pre-algebra to AP Calculus, except AP Statistics and continuing education courses. She enjoyed it when the state switched to the new integrated math standards in 2010. She loved teaching and integrating connections between algebra, geometry, and algebra II, instead of teaching each subject by itself. She started using task-based and inquiry-based mathematical learning experiences.

“I loved making my classroom a place where traditionally underrepresented groups of students felt safe, and I particularly enjoyed making math accessible to all students,” she said. “One of the ways I did this was by helping students see themselves differently—changing their thinking so that they began to see themselves as mathematical thinkers and doers.”

Towards the end of her teaching career, she decided to form her own business—Sugar House Instructional Design—so that she could consult on curriculum development projects. She taught and consulted with private STEM Education Technology (EdTech) startups. Her consulting practice went well, and she was quickly promoted from consultant to chief academic officer for a local startup called Zaniac.  She spent two years there before moving to Because Learning! (formerly Ardusat) as the director of learning.

From Because Learning! she made the transition back to public education, but now she had her math and teaching skills, along with her newly honed people and project management skills. She landed a district-level leadership position in the Davis County School District, the largest public district in Utah, and served as their K-12 mathematics specialist for the next two years. She found that she had a talent for bringing together diverse stakeholders and achieving a consensus, along with building productive, positive communities of educators.

When a secondary mathematics specialist position opened at the Utah State Board of Education, Henderson saw an opportunity to work with a community of mathematicians at the state level. In the two years since she joined the board, she has built a community of more than 4,000 math or math-adjacent educators/leaders, significant growth from the 250 educators she inherited when she first began working for the state. Since Utah switched to an integrated secondary mathematics core in 2010, there have been remarkable student results.  “I’ve been proud to unite the Utah Secondary Mathematics community around a shared common vision for mathematics education in Utah, as well as set the tone of the culture for what mathematics looks like for secondary math students in Utah,” she said. She also has been fortunate to work with higher education partners on several projects, most recently in updating the Secondary Mathematics endorsement requirements. Math endorsements are required in order to teach in a public school in Utah.

She has been doing a lot of collaboration with the local mathematics community and also with the Conference Board of Mathematical Sciences. She is preparing for the 2023-2024 school year when mathematics core standards are up for revision, with the goal of updating standards and determining the best path forward to ensuring that Utah high school graduates have the requisite math skills.

Henderson lives with her wife and kids in Salt Lake City. She loves to read, enjoys summer, and is drawn to water in nature—lakes, oceans, rivers. “I seem to stumble across parabolas a lot when I am out and about,” she said. “I’m also the crazy cat lady in the neighborhood—I have four Scottish kilt kittens that I adore. My wife and I really love living in Utah and all that it has to offer.”